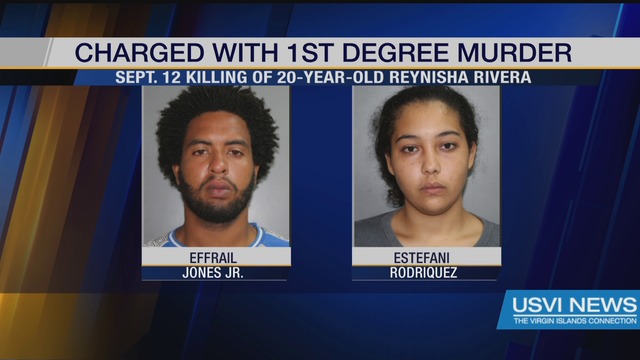 ST. CROIX, USVI – On September 26 at roughly 7:09 a.m., police arrested 23-year-old Effrail Jones, Jr. and Estefani Rodriquez, age 21, both of La Grande Princesse. They were charged with 1st Degree Murder, 1st Degree Assault, 3rd Degree Assault, Carrying a Firearm Openly or Concealed During the Commission of a Crime of Violence, Possession of Ammunition, and Discharging or Aiming a Firearm.

Officers of the Criminal Investigation and Special Operations Bureaus executed search warrants at a residence and found a firearm and ammunition. Jones and Rodriguez admitted to the shooting and killing of 20-year-old Reynisha Juanita Rivera on September 12.

Bail for Jones and Rodriquez was set at $1,000,000 each. They were unable to post bail and were turned over to the custody of the Bureau of Corrections pending their Advice of Rights hearings.

St. Croix District Chief of Police Sidney Elskoe praised detectives for their commitment to closing this case with arrests. He encourages the community to contact the VIPD with tips to help solve other open cases. “If you see, hear, or know something, please say something,” Chief Elskoe said.